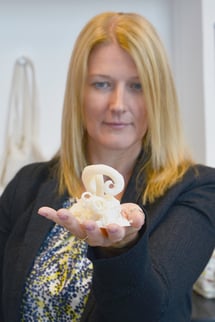 Professor Cruickshank is an immunologist in the University of Manchester.

She did her first degree in immunology and biochemistry at the University of Strathclyde and then her PhD in immunology with CRUK at the University of Leeds where she worked before moving to Manchester to set up her own lab. Her research aims to understand how the immune response distinguishes what is good like the friendly bacteria that live in and on us from what is bad like parasitic infection. She is really interested in developing biomarkers as tools that can help with patient diagnosis and patient care. She enjoys communicating her research to the public and believes it is a vital part of a scientist’s role in society. She has also discussed infection and her work on the radio and TV and has received prizes and commendations for her public engagement work.

Public health is a concern for all communities and having at least a basic understanding of infections and how they spread is crucial. However, in majority immigrant communities, that understanding can be challenging when there is a language barrier or when prior experiences with medical personnel or scientific information left some feeling left out or patronized.

In this interview you will hear from Sheena Cruickshank, Professor in the Division of Infection, Immunity & Respiratory Medicine at the University of Manchester. She will share how she and her colleagues sought to introduce a “public engagement” approach in hopes of bringing these various communities together to be a part of the public health discussion and develop a better understanding about their own health futures.

SoftChalk: Was there a specific moment or event that made you see that there were real public health issues based on a lack of understanding or communication in your area?

Sheena: A large part of my research involves studying parasitic infectious disease such as worms that can live in the gut. Although around 2 billion people have these infections, they are relatively rare now in the UK. I enjoy sharing the findings of my research with the public and do lot of public events like talks, activities and workshops. However, I particularly wanted to share my research with people who might have had first hand experience of the infections that I study so that their insights could inform my research so I started doing workshops with immigrant community groups based in the UK. In workshops with community groups I realized that scientific and medical language is a real barrier to accessing health information. This is an issue for native English speakers but a bigger issue for non-native English speakers. In order to have better conversation with people about health and infection, I realized that I needed to tackle the language barriers around scientific English and set out to help create science and English resources to help bridge the gap.

SoftChalk: What is the cultural makeup of the communities who initially benefited from this initiative?

Sheena: This course has been delivered to adult and teen learners from a wide variety of countries including Iraq, Somalia, India, Pakistan, Afghanistan, Sudan, Ethiopia, Iran, Sri Lanka, Turkey, Nepal, Eritrea, Libya, Portugal, Mali and Italy This resource is suitable for anyone with an interest in science and will be of particular interest to those who want to enhance their English skills and be able to better communicate health care issues, for example with doctors, family or friends.

SoftChalk: You mentioned in the article you wrote with your colleagues that you visited community centers to meet people from immigrant and migrant communities—what did you learn about their perception or knowledge about general healthcare?

Sheena: I learnt a lot from working with community groups. There was a real keenness to learn about science but some gaps in knowledge which surprised me. Parasitic worm infections have been linked to poor attainment at school as children are particularly vulnerable to the infections and infection can leave children tired, anaemic and unwell resulting in them missing school. There are major campaigns to de-worm school children to help bridge this potential gap in education attainment. Yet, I was surprised that several of the people I talked with were unaware of these schemes and the impact of infection even though most had experience of the infections. There were also misconceptions about the infections that meant some people thought they were dirty and bad, when the reality is these are incredibly common and easy to catch. By having open conversations about the infections and our research we could help bust some of these myths and learn from each other.

SoftChalk: How did you determine which areas of interest, like vaccines, were most important and that those were where to start your initiative?

Sheena: All the topics were identified as important and of interest by workshop participants who attended a series of focus groups in Manchester, UK. Of particular interest was more information about how people get infections and how they can be prevented, common infections, how our immune system sees infection and what happens when our immune system goes wrong and causes allergy. There was also interest in looking at some infections in history as it made people appreciate that worms infections were once common place in the UK for example and showed how understanding has changed over the years.

SoftChalk: Once you developed the series of lessons in English, and made them a part of existing students’ ESOL courseload, what was the impact you saw? How did it benefit the students and the conversations they were having at home? 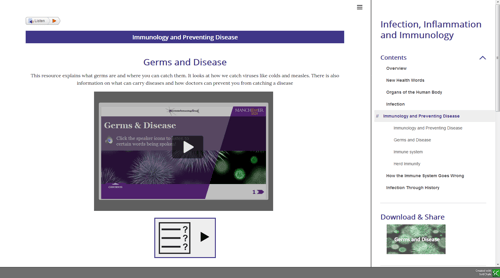 Sheena: The lessons were created in partnership with English teachers at Bolton College and trialed there. Students reported that they wanted to share their new knowledge with their friends and family and, importantly, apply the knowledge, suggesting greater empowerment and confidence. The teachers also reported the excitement in the classrooms as students were eager to discuss what they had learnt with each other, the teachers and researchers, and to share their ideas. Teachers saw the impact of the project in how students enjoyed taking their learning home with them and discussing it with their families, with many commenting on this during the course. Participants particularly valued aspects of the course that they could see would have relevance to their children or families. Prior to the course, the students were unhappy going to the doctor unless they had a translator. One student described the translator getting their symptoms wrong, leading to misdiagnosis. All students reported that they felt more confident in visiting the doctor’s, and using medical words after the course.

SoftChalk: What are the next steps for the project?

Sheena: We are continually looking for other areas or topics to add to enrich the portfolio content. We have also been adapting content for use in the field to help work with rural communities in isolated places and have done a lot of work in Madagascar.

SoftChalk: For those who are looking to gain a better understanding of public health and things that may impact their specific community, where would you suggest they begin? You mentioned that there is a lot of misinformation constantly circulating, how can you spot what’s factual and research-based?

Sheena: It can be very confusing to access accurate information. I would also suggest you cross check information with reputable organizations like the World Health Organization, British Society for Immunology or Centers for Disease Control and Prevention (CDC) who have excellent fact sheets on immunology and diseases. See if there are links to peer-reviewed publication that have been assessed by experts.

SoftChalk: How has working on this project impacted you professionally and/or personally?

Sheena: I have found the project incredibly inspiring. Sometimes when you work in a lab, you can become so focused on a partial experimental issue that you forget why you started researching an area in the first place. Talking with people about your work, helps reconnect you to your research and reignite your passion for science. Specifically, for me, I felt that I needed to make my work more directly of benefit to the public and so I started re-focusing my research on developing markers that could be used to better diagnose and monitor disease.

Learn more about Sheena and her colleagues' work in their article in the Research for All publication.